In the 15 years that we have been co-creating retreat experiences, never has the urge to commune and support one another felt more destined. And while we often call our gatherings a RETREAT, they are actually more of an ADVANCE because we have remained loyal to our one common vision: to advance our students towards a deeper level of self-discovery through the power of movement, shared wisdom, meditation, and attunement with nature.

Our prior retreat students often tell us that we over-deliver; this is a badge of honor that we wear proudly! Our days begin with sunrise mantra on the beach followed by guided meditation, dynamic movement through traditional yoga and Embodied Flow™️ somatic, Ayurveda lectures, and Nidra sessions.

Marc continues to build on his Ayurvedic knowledge to include the potent and healing essential oils of medicinal plants in combination with Yoga Nidra. Tara continues to explore methods for guiding people into meditation in motion through asana, free movement, and embryological and developmental patterning within Yin Yoga.

We are excited to share our new discoveries with you.

Of course, you’ll also enjoy nearly five free hours daily in which to swim in the pristine, Cycladic, turquoise sea, play in the sun, visit ancient towns and ruins, or simply journal and take long naps. And let’s not forget our extraordinary Indian chef, Suresh, who graces us daily with fresh, organic, vegetarian dishes harvested directly from the Okreblue garden.

Whether you are one of our retreat Alumni or have been postponing this gift to yourself for a few years, we invite you to join us once again or for the very first time to watch the magical sunrise in the east morph into the glowing sunset in the west. The famous liquid glow of Grecian light is sublime.

This is how you synchronize your body/mind to the rhythms of nature.

This is where deep rejuvenation begins.

This is why we return.

Come celebrate with us.

Please find a sample schedule below and note this is to give you an indication only. Finer details will be confirmed closer to the time.

Room Share Policy:
When booking a shared room while traveling alone, we will do our best to couple you with another same-sex participant that is traveling solo too. In case this is not possible, you will be required to upgrade to a single room. People are coupled based on the order in which bookings come in. So when you book early, there is a high chance that you can share the room with another participant.

Daily breakfast/brunch and dinner is included with the retreat. You will be nourished by the food grown in Okreblue’s own organic gardens. Our private chefs offer daily sumptuous organic, Indian/Mediterranean infused farm to table vegetarian meals from our garden or local farmers. All of our meals are served in our cafe /dining hall Caretta.
Vegan, gluten free, wheat free, dairy free diets and other special diets can be accommodated upon request.
Apart from our included meals, the cafe is open daily and serves light meals and drinks. Tea as well as drinking filtered water is available all day. 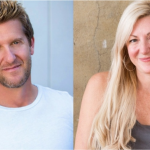 Marc Holzman
As a pioneer for deep change, Marc has dedicated most of his own life to unraveling this great mystery. An avid Truth-seeker and playful risk-taker, Marc is passionate about refining the art of living and empowering his students to do the same.

Marc is a certified Ayurveda practitioner and Amrit Yoga Nidra teacher with over 18 years’ experience teaching Hatha Yoga and Meditation. He currently lives in both L.A. and Paris for greater access to the workshops, teacher trainings, and retreats he teaches across the globe. He can also be found across the ethers via his many classes streamed on Yogaglo.com. His signature Ayurveda health coaching program, Evolutionary Habits, has been accelerating the wellness path of students since 2012.

Ten years ago, Marc founded Guerilla Yogi, a donation-based community class, to encourage students of all economic circumstances to experience the joy of yoga. Guerilla Yogi continues to thrive in Paris where it has gained tremendous momentum.

Because Marc firmly believes that the highest form of teaching is leading by example, he strives to live with integrity and kindness. And laughter. Always laughter.